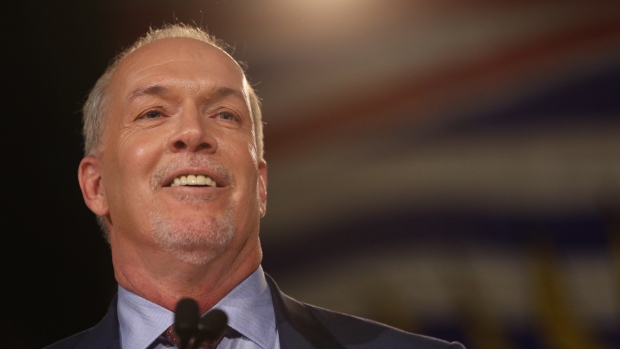 NDP Leader John Horgan will become premier of British Columbia and have the opportunity to test the confidence of the house.

Horgan made the announcement to reporters at Government House, following a dramatic series of events at Guichon's residence.

B.C. Liberal Leader Christy Clark met with Guichon for about 90 minutes immediately after her government lost a confidence vote in the legislature.

But she left without a decision from Guichon.

Less than 10 minutes after Clark left, after telling reporters no decision had been made, Horgan drove to Government House.

In a statement, Guichon said the following: "I have met with Premier Clark and will accept her resignation. I have asked Mr. Horgan to form a government, he having assured me that he can form a government which will have the confidence of the Legislative Assembly."

The NDP and Green Party have 44 MLAs — the minimum number for a majority — and they all voted in favour of the non-confidence motion and pledged to support Horgan as premier.

But Clark had argued in recent days the legislature was "not a functional place" in its current configuration. She said an NDP government would be paralyzed because of the expected need for one of its own MLAs to serve as Speaker, thus creating continued 43-43 vote ties.

It was an argument Guichon ultimately decided to reject.

Guichon will not be making any further comment on her decision beyond her statement, but Horgan is expected to address the media shortly.

The provincial election on May 9 ended with the Liberals electing 43 MLAs, the NDP 41 and the Greens three, setting up the last seven weeks of political battles.